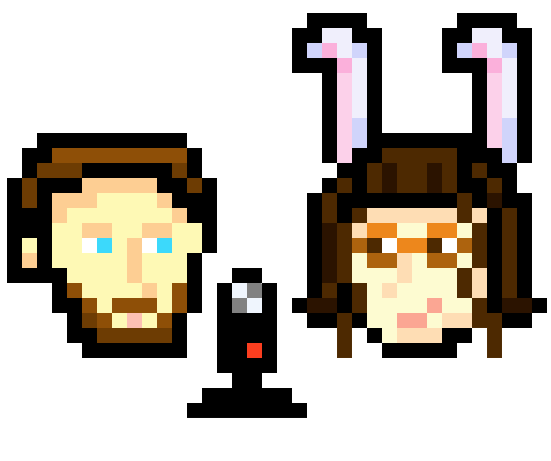 And this is a podcast in which we adapt retro video games into radio-style dramas brought to life with music, sound effects, and volunteer voice actors from all over the world. Replay your favorite video games WITH YOUR EARS.

The Spoony Bard’s Aural Theatre’s ambition is to produce unique revisitations of classic video games by providing a medium through which the listener may re-experience (or experience for the first time!) an old video game through audio.  While the two of us write the scripts ourselves, all spoken dialogue is quoted verbatim as it appeared originally, including — and celebrating — odd localization choices.  All the music and sound effects used are extracted from the games themselves, as we try to be as authentic to the source material as possible.

From The Spoony Bard’s Aural Theatre’s stumbling and awkward beginnings to it’s most recent stumbling and awkward release there have been a growing cast of diverse vocal talent.  In the beginning the two of us nerds handled almost all the voices, relying on our rather narrow range and abusing pitch alterations to hide it.  But since then, dozens have contributed their voices, some local friends and actors from the local community, and the rest from the Internet.  Many of the people voicing these characters are regular performers, while others are just enthusiastic fans of the games.  Many of them have never acted before in their lives.  The result is a wide spectrum of voices and interpretations that result in the kind of smorgasbord of personalities that don’t feel out of place at all in the bizarre otherworldly fantasy lands we visit.  And their talent is given to us for free; nobody has been paid for any of this.  The Spoony Bard is not a wealthy bard 😦

Whoa this part is still being updated.  Hold on, go back, ignore.  Abort abort